Can Cockroaches Survive a Nuclear Blast? 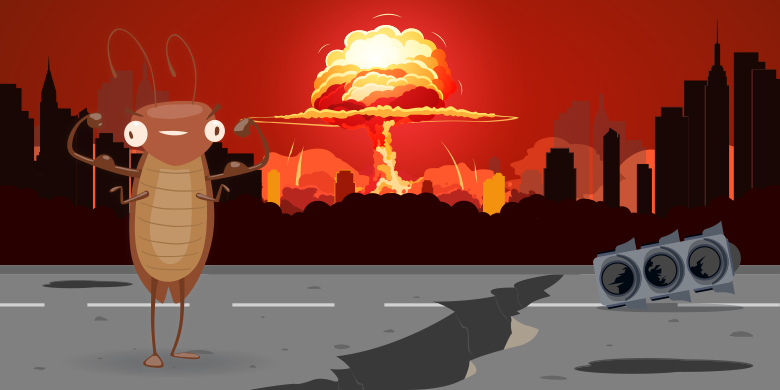 Not only are cockroaches known for their nightmarish, scuttling demeanour and ugly appearance, they’re also one of the most resilient pests you can find. Even if you’ve never seen a cockroach up close before, you’ve probably heard the famous myth that they’re the only creature that can survive a nuclear blast.

While this has done a lot to build the mystique and reputation of these pesky insects, it’s not quite true. Read on to learn about the truth behind the cockroach myth.

Origins of the myth

In the aftermath of the 1945 Hiroshima bomb, early reports emerged that cockroaches were the only thing to survive – they were seen roaming through the rubble. While you might think this is strong evidence, it doesn’t tell the whole story – but the myth was allowed to grow to cover any and all nuclear explosions. The fear that cockroaches would ‘inherit the Earth’ became more real, but this has since been put to bed by the Mythbusters team, in an episode aired on the Discovery Channel.

Again, this seems like damning evidence. But a nuclear blast isn’t solely radiation; there’s also the heat. The Hiroshima bomb is estimated to have measured gamma doses in the air of 10,300 rads – enough to kill a human, but not a cockroach. But the intensity of the heat from a nuclear blast will kill cockroaches instantly if exposed.

While the Mythbusters test was carried out on German cockroaches, other species will have varying radiation resistance levels. There are 4,600 species of cockroaches – and only a small percentage of them – around 30 species – exhibit pest-like behaviour, but it’s safe to say that any species of cockroach would not be able to survive a direct nuclear bomb blast; if the radiation doesn’t get them, the heat and impact will.

If you’ve got a cockroach problem in your home or business, put your Geiger counter away and call in the professional pest control team at ClearFirst instead. We don’t resort to drastic measures to remove cockroach infestations, we tackle the source of the issue and work to create an environment that doesn’t encourage the recurrence of any infestation.

Call up ClearFirst Pest Control today to discuss your pest problem today. Our technicians will be on hand to advise and carry out effective treatments to your full requirements. To find out more, simply contact us today.